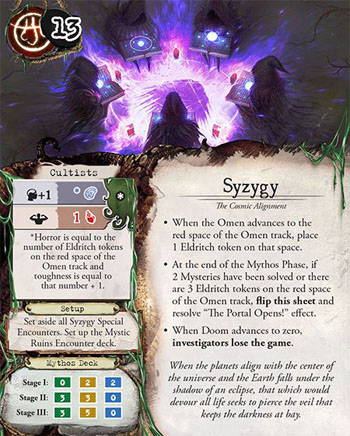 Syzygy is a scenario (equivalent to the Ancient Ones) from the Strange Remnants expansion.

There is no normal victory. When 2 Mysteries have been solved, "The Portal Opens" effect is triggered at the end of the next Mythos phase..

The players have 13 spaces on the Doom counter before the game ends.

When the planets align with the center of the universe and the Earth falls under the shadow of an eclipse, that which would devour all life seeks to pierce the veil that keeps the darkness at bay.

Set aside all Syzygy Special Encounters. Set up the Mystic Ruins Encounter deck.

Syzygy is currently unique in that it doesn't refer to an Old One. A syzygy is a cosmic alignment.

Community content is available under CC-BY-SA unless otherwise noted.
Advertisement